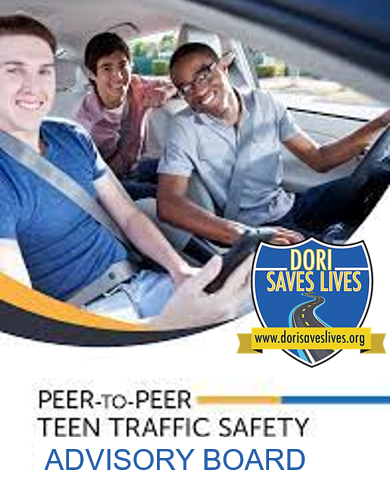 Welcome to the big leagues you're driving now! For as long as you can remember, you've probably been dreaming about the day you could get behind the wheel of a car and drive! Getting your driver's license is the first step to independence, but it comes with a ton of responsibility and risks. Despite what you may think, driving is super complex. It takes a bunch of focus, lots of practice, and commitment to become a skilled and safe driver.

In addition to helping teens learn about safe driving, Dori Saves Lives is committed to helping teens find their voice. Teens, just like you, are speaking out about teen driver safety and working to strengthen laws, educate parents and teens through school and community events, and engage the media.

Your voice is powerful! Elected officials, reporters, and business and community leaders need and want to hear what you know and think. You also have the ability to influence your classmates, friends, younger siblings, even your parents, about traffic & road safety.

Advocate - Definition: To speak in favor of; recommend A person who argues for a cause; supporter or defender.

As an advocate, it’s your job to educate important groups of people -- legislators, the media, parents, your peers. You do that by sharing information and offering a solution. You may already be an advocate for teen driver safety or some other issue and not even realize it. If you’ve ever stood up for someone who was being treated unfairly, participated in a meeting where you expressed your opinion or posted a message on Facebook encouraging your friends to do something, you engaged in advocacy.

Sometimes advocacy involves lobbying. That’s when you communicate with an elected official and ask him or her to take a position on a specific piece of legislation. Many teens have played a critical role in lobbying for laws that address teen driving. Efforts to educate and influence legislators and other policymakers’ opinions are allowed by law and an integral part of our democratic process. In fact, public officials welcome input from well-informed citizens and want to hear specifically from teens about teen driver safety.

Why should I advocate for traffic & road safety?

In 2019, almost 2,400 teens in the United States aged 13–19 were killed, and about 258,000 were treated in emergency departments for injuries suffered in motor vehicle crashes. That means that every day, about seven teens aged 13–19 died due to motor vehicle crashes, and hundreds more were injured. In addition, motor vehicle crash deaths among teens 15–19 years of age resulted in about $4.8 billion in medical and work loss costs for crashes that occurred in 2018.

Mile for mile, teens are involved in three times as many fatal crashes as all other drivers. Why? Teens aren’t bad drivers, you’re simply not experienced. That coupled with developmental and behavioral issues contribute significantly to what happens behind the wheel.

What does that mean? The part of the teen brain that controls impulse, decision making and judgment — the prefrontal cortex — isn’t developed yet. That makes some, but not all teens, prone to risky behavior. Research also confirms that teens who thrill seek, act aggressively, succumb to peer pressure, or fail to view deviant behavior as inappropriate, are more likely to be involved in motor vehicle crashes.

You have the perfect credentials to be an effective teen driver safety advocate — you’re a teen, you drive (or ride with friends who do) and you want to be safe. But effective advocacy doesn’t just happen. You have to do your homework. That starts by researching the issue. Next, you must develop your message so you know exactly what you want to say. Then you communicate that message clearly and succinctly to an individual or group to capture their attention. And finally, you provide a call to action.

AN EFFECTIVE ADVOCATE IS...

Confident: Recognize that one person — YOU — can make a difference. (Just think how Rosa Parks’ simple act of defiance helped jump-start the civil rights movement!

Respectful: Take the high road and agree to disagree when someone offers a differing viewpoint.

Focused and Concise: Respect your listener’s time and attention span by keeping your message short and to the point. Most people can only process a maximum of one to three things at any given time.

Impactful and Engaging: Tailor your message to your audience so that it addresses not only what they need to know, but how your issue directly affects them.

Relevant: Tell how real people from your community or state have been impacted by the issue and/or use local data to make your case.

Practical: Determine what to strive for based on available resources, the make-up of the Legislature and other factors. Consider working for incremental rather than sweeping change.

Action-Oriented: State what you’d like your audience to do and then give them an immediate way to do it.

How do I engage the press?

The press plays a critical role in increasing awareness of teen driver safety and the impact novice drivers have on all roadway users. But newspaper, radio and television reporters, editors and producers don’t know a lot about teen driver safety. Media coverage is often prompted by a fatal crash or the introduction of legislation calling for tighter driving and/or licensing restrictions on you and your peers.

As an advocate, it’s your job to educate the media about teen driver safety and help them identify potential news hooks so coverage is more frequent and consistent. News hooks are a reason to cover a story. It is something unique that will help the reporter get readers interested in their report.

As a teen advocating for teen driver safety, you bring a unique perspective to the discussion. That in itself is a potential news hook. But you can also work with the press to bring teen driving data, the foundation of many news stories, to life. While coverage discussing how many teens are hurt or killed in crashes is newsworthy, helping a reporter dig deeper to discover when (after school, at night, on a certain day of the week), where (on highways, local roads, near schools) and why (distraction, inexperience, speed, alcohol), will make for a better and more compelling story. Offer your teenage insight and it’s a home run.

By providing this information to the press, you also establish yourself as a key resource. Reporters like experts and are more likely to listen the next time you pitch a story idea or ask them to cover your teen driver safety event. Also, if a teen driving crash occurs in your community or state, there’s a good bet the reporter will reach out to you for comment.

One of the best ways to introduce yourself and your cause to the press is by writing a letter to the editor (letter) or an opinion editorial (op-ed) for your local newspaper or community website. A timely, well-written letter or op-ed can influence public policy and opinion, as well as prompt an editor, producer or reporter to reach out to you to learn more about your issue. Write a letter or op-ed to share your opinion about a recent event such as a rally at your school or a teen driver crash, respond to a news story or editorial that appeared in the newspaper or on the website, or call attention to an observance such as National Teen Driver Safety Week, Global Youth Traffic Safety Month or Alcohol Awareness Month or a legislative initiative.

A press release is another tool advocates use to generate media interest and/or coverage in print (newspaper), broadcast (TV/radio) and online media. A press release typically announces an upcoming event (“Teen driver safety rally at State Capitol”), research finding or new data (“Stronger Licensing Laws Shown to Reduce Teen Crashes”) or an organization’s viewpoint (“More Parent Education about State GDL Law Needed”). It should be written so that the most important information is in the first paragraph and the less important information follows (that’s called the inverted or upside-down pyramid style). The first paragraph should also answer six key questions: who, what, when, where, why, and how?